Summary
Newport, Oregon, was built on tourism and natural resource industries like timber and seafood, and the Bayfront quickly became its economic hub. Later, with the construction of jetties and dredging of the Yaquina Bay channel, the shipping industry took hold. In the early 1900s, the Bayfront began to change shape as businesses migrated away due to the construction of Highway 101. Then, in the 1980s, business and government leaders developed a revitalization plan to establish Newport as a destination resort and research hub to lessen the city’s dependence on natural resources and tourism. Today, Newport is home to the Hatfield Marine Science Center, the Oregon Coast Aquarium (which attracts 500,000 visitors annually) and NOAA’s West Coast fleet. Newport also is homeport to one of Oregon’s largest commercial fishing fleets, which delivers fish year-round to the numerous processing plants along its waterfront. In 2011, approximately 326 commercial vessels landed over $44 million worth of seafood into Newport’s thriving working waterfront.

Newport continues to bring in millions of dollars in tourism to an economy that is contingent on a productive and authentic working waterfront. BayFront facilities include two berths capable of serving oceangoing vessels, 510 berths for mooring commercial and sportfishing vessels, frontage for servicing fishing boats, a dry boat moorage of 120 boats, and a 220-foot pier for docking large and small research vessels. The Bayfront also includes a public wharf full of shops, art galleries, chowder houses, restaurants, and museums.

Newport has been successful in preserving existing uses while actualizing a long-term vision for its future. However, achieving a balance of tourism, research, and fishing is not without its conflicts. With an uncertain future for fisheries and a burgeoning tourism industry, the community of Newport continues to seek a balance between new and existing uses for its waterfront.

Transferability
Newport, Oregon is an excellent model for progress through partnerships as represented by the strong communication and coordination established between the City, the Port, and community leaders. The development of a vision for Newport was greatly facilitated by Oregon’s farsighted statewide planning goals, and by local government’s deep appreciation for the culture and history of the area. The balance between existing uses, the application of planning tools, the establishment of citizen advisory boards, and the abovementioned working partnerships have kept Newport’s working waterfront thriving. This type of cooperation is contingent on a common vision and an understanding that progress requires a unified effort. This political culture may not exist in larger, more diverse communities.

Best Practices
Constant coordination and communication between government agencies has been critical to Newport’s success as a working waterfront community. A high level of interaction and efficiency has been ensured through “strategic partnerships” and “cross-pollination” between groups. For example, city representatives attend Port meetings and vice versa.

Oregon’s statewide planning goals make clear the importance of water-related and water-dependent uses and Newport has done everything possible to preserve them, thus aligning with the community’s desire to preserve historic uses. Though industrial water-dependent areas of many communities are vacant or have fallen into disrepair, Newport realized that it was in the city’s best interest to cherish this real estate and ensure that it remains a water-dependent zone. The City understands that once water-dependent uses are lost, they rarely can be reinstated. Thus, rather than focusing exclusively on investment returns when it evaluates new business proposals, the City considers them within the context of a larger vision that incorporates the community’s culture. Permitted uses must align with the overall vision and character of the community, and this is reflected in the well-balanced mix of uses along the Bayfront.

Full Case Study Description
Background
Newport was founded on seafood and tourism: the Yaquina Bay oyster beds were discovered in 1862 and the first tourist resort opened in the late 1880s. Tourists came to enjoy the coast, eventually making the Bayfront the economic hub of Newport, supporting wood product industries and commercial fishing, and, later, shipping and seafood industry with the arrival of electricity, channel dredging, and jetty improvements. Today, Newport is one of the most economically diverse ports along the West Coast, supporting research, tourism, commercial and recreational fishing, aquaculture, shipping, and more.

Challenges and Issues
Although many historic uses still thrive in Newport, several challenges make for an unclear future. One problem, faced by many ports and harbors, is a lack of funding to repair and maintain infrastructure that is vital to waterfront industries. With the future of commercial fishing on the West Coast increasingly uncertain, along with a dwindling fleet, infrastructure investments represent higher risks in a struggling economy. For example, a major tourism draw on Newport’s Bayfront is the local sea lion population that frequents a tie-up dock. However, the dock is in disrepair and more pressing budget priorities mean that it may be lost — along with the sea lions that call it home. Furthermore, the dock is “grandfathered;” once it is gone the permit does not allow a replacement structure to be built.

Instability is inherent to natural resource based industries. Oregon’s coastal towns were weakened by a significant decline in wood-based industries and, today, with the uncertain condition of West Coast fisheries, another shift in the economic landscape may be inevitable. A danger posed by a shrinking fleet is the conversion of valuable waterfront real estate to non-water dependent uses: once this critical infrastructure is gone it rarely returns. To resolve these challenges, Newport promotes historic and cultural water-dependent uses by providing planning and infrastructure support. Recently, the City leased a deep water terminal to support its first logging operation in over a decade. Funding for repair of the international terminal came from a $20 million bond, voted on by the Port district. To provide for log exports and distant water fisheries, the Port had to seek out an additional loan to the Port bond. This project brought jobs, money, and partnerships. However, this “new” industry will generate more activity in an already busy Bayfront. To make this enterprise possible, the City and the Port are developing alternatives to car traffic, including a joint grant application to construct bike and pedestrian pathways to offset increased traffic from logging trucks.

Parking is a source of contention along the Bayfront. An active working waterfront with commercial fishing means that fishermen are out-to-sea for days or weeks. While out-to-sea, fishermen often leave their vehicles in prime parking spots that are coveted by local businesses for use by their patrons. When parking is not available, fewer tourists and customers frequent local businesses and they suffer economically. Additionally, loading zones designated for commercial fishing and processing are not always respected, which causes additional conflict between waterfront interests. Unfortunately, there are shortages in available real estate along the Bayfront to address such issues, with constraints on the landward side by a steep slope that is vulnerable to sloughing. Additionally, the amount of empty real estate is sparse and most modifications to the waterway are a product of renovation rather than new development.

Newport also has major problems providing housing for its workforce. People who work along the Bayfront often are unable to compete in the local housing market, forcing them to live outside of Newport proper. With the increased commute and rising gas prices, the situation becomes untenable for them and also poses a threat to waterfront industries. The City is taking steps to address the issue: for example, the Newport Comprehensive Plan allows conditional use permits for non-prioritized uses along the waterfront. However, this type of permitting can lead to permanent loss of working waterfront infrastructure, even though the vision of the City, the Port, and of local citizen groups is to maintain historic uses as part of the overall culture of Newport.

Actions and Approaches
The City and the Port work together closely to meet Statewide Planning goals, realize a return in investments and land, and, most importantly, to ensure that the community’s vision of a working waterfront is preserved as outlined in the Comprehensive plan and through input from the City’s Citizen Advisory Group. Oregon’s statewide planning goals, particularly 16-19, address estuaries, shorelands, beaches and dunes, and ocean resources, and are applicable to port policy, expansion, and sustainable development. The City of Newport’s Comprehensive Plan is designed to comply with these goals, but it also offers flexibility in how they are interpreted. Nonetheless, water-dependent and water-related designations do restrict the City’s ability to permit uses that would negatively impact the working waterfront.

One statute within Oregon’s planning goals specifically addresses ports, including Newport’s. The statute establishes that the development of facilities at certain ports is a state economic goal, and directs state agencies to assist ports to achieve this goal. Specifically, the statute recognizes that “assistance and encouragement of enhanced world trade opportunities are an important function of the state, and that development of new and expanded overseas markets for commodities exported from the ports of this state has great potential for diversifying and improving the economic base of the state. Therefore, development and improvement of port facilities suitable for use in world maritime trade at the Ports of Umatilla, Morrow, Arlington, The Dalles, Hood River, and Cascade Locks, and the development of deepwater port facilities at Astoria, Coos Bay, Newport, Portland, and St. Helens, is declared to be a state economic goal of high priority. All agencies of the State of Oregon are directed to assist in promptly achieving the creation of such facilities by processing applications for necessary permits in an expeditious manner and by assisting the ports involved with available financial assistance or services when necessary.” (Chapter 777.065).

Next Steps
The City of Newport currently is working on an “economic opportunity analysis” as an update to its comprehensive plan, which is revised every 10 years to ensure its compliance with state goals and City priorities. As the “new” logging industry takes shape, the patterns of existing user groups and infrastructure needs will shift. The City is prepared to take on new uses and it plans to remain open and nimble to address any unforeseen conflicts that arise. This includes the joint proposal by the City and the Port to install a bike and pedestrian path along the Bayfront. In addition, the Port is investigating the possibility of visits by cruise ships; if such visits are deemed feasible, next steps will include a comprehensive assessment and a community outreach campaign to gauge community interest. The Port of Newport also is undertaking strategic planning for its properties, which will be integrated into the City’s Comprehensive Plan. With limitations in space, the City is working with the Port to develop a system to more efficiently store commercial fishing gear and manage space. 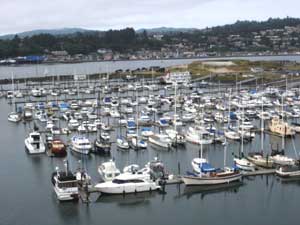