Summary
The Thea Foss Waterway project is an example of one city’s successful efforts to preserve historic and traditional uses while creating new opportunities for education, recreation, and economic development. The City of Tacoma, the Tacoma Planning Commission, and the Community and Economic Development Department led the evolution of the Thea Foss Waterway from a Superfund site to one of the Pacific Northwest’s premier mixed-use waterfront communities. The project complies with the Washington State Growth Management Act and it was drafted into Tacoma’s Shoreline Master Program update, which is a part of the State’s interpretation of the Federal Coastal Zone Management Act. Renovating the Thea Foss Waterway realizes Tacoma’s long standing goal to implement a compelling adaptation of its waterfront for educational, economic, and recreational use by the community.

Transferability
The Thea Foss Waterway redevelopment project is an example of how a community can reclaim its waterfront and waterway from decades of neglect and contamination. The project was spurred, in part, by the EPA Superfund designation, but mostly by the community’s push to save Tacoma’s heritage and history, and the City’s desire to create a new, viable economy on the doorstep of Tacoma’s downtown. This type of community engagement is transferable to other communities. However, the City was able to galvanize efforts around the Superfund site, which may not be a central issue of focus for other waterfront or waterway communities.

.Plan for downtown redevelopment and waterfront revitalization simultaneously, and plan for environmental preservation and economic development together.

Background
The City of Tacoma was born on the waterfront, where its deep-water port and the western terminus of the Northern Pacific Railroad attracted businesses and the employees to work them. Over the past 100 years, the Thea Foss Waterway area was home to industries such as lumber mills, a cement factory, petroleum processing plants, a chemical processing plant, and ship-building operations. For several decades the port thrived, but, from the 1960s through the 1980s, as the economy weakened, many industries moved or went out of business. Those vacancies were not filled and the waterway’s role as the city’s economic driver began to decline.

Along with Tacoma’s legacy as a thriving port town came more than 100 years of pollution. Back then, waste materials were dumped into the waterway, along with the City’s untreated sewage. People thought the tides would carry the waste and pollution into the bay and, eventually, to the ocean. Instead, contaminants persisted and, years later, more than 125 acres of contaminated sediment was discovered on land and in water. In 1983, The Environmental Protection Agency (EPA) designated the Thea Foss Waterway and Commencement Bay a Superfund cleanup site. A century of industrial waste, sewage, and runoff had taken its toll and the waterway faced a major overhaul that would cost the City and some of its businesses a small fortune.

In addition to the Superfund designation, the City became embroiled in a tribal land settlement in the 1980s: the Puyallup Indian nation claimed land rights to over 18,000 acres along Commencement Bay. During this time, businesses along the Thea Foss Waterway faced a very uncertain future. Should the Tribe reclaim its rights to the land, businesses leasing property from the City could be forced to relocate. The uncertainty halted owners’ investment in, and upkeep of, waterway properties. The impasse was broken when, after more than a decade of litigation, the Puyallup Tribe accepted a $162 million dollar settlement.

The Thea Foss Waterway was developing a reputation of pollution and neglect, leading residents, City officials, and business owners to take action. The City was growing up and wanted its unique waterfront area — the “door to the city” — to be a highlight, not a Brownfield. Thus, the City, the Tacoma Planning Commission, and the Community and Economic Development Department led the evolution of the Waterway from a Superfund site into one of the Pacific Northwest’s premier mixed-use waterfront communities. The Thea Foss Waterway project is a prime example of one city’s successful efforts to preserve history and traditional uses while creating new opportunities for education, recreation, and economic development. Important steps along the way are described below.

Challenges and Issues
The Thea Foss Waterway project is unique in that its success depends on increases in population density in Tacoma. A major issue slowing progress (along with market forces and the economic downturn) is that few people live and work in downtown Tacoma. Most developers considering substantial investments in waterway property require an increase in the number of residents and visitors. Thus, the City has had major problems attracting redevelopment to its downtown, making a quick turnaround on waterfront investment less likely. As more people live and work downtown, the public will find that it isn’t difficult to get to the waterway and, as a result, the number of events and activities will increase, spurring more pedestrian traffic.

Redevelopment efforts have taken longer than expected. Remediation work, market issues, existing uses, and absorption* issues have slowed progress. Sporadic development on the Thea Foss Waterway has led to “esplanade islands” that do not connect. The original policy was to complete sections of the public esplanade in conjunction with upland development. However, properties adjacent to developed sites remain vacant, resulting in small public access points directly in front of new development. The City and Foss Waterway Development Authority are now focused on completing the public esplanade in advance of upland development, to position the project for the next round of redevelopment and activate the waterfront with increased public use.

Actions and Approaches
In the 1980s, the City Club of Tacoma, a group of citizens and business owners, crafted the “Dome to Defiance” Plan. This plan captured their vision for a waterway that would offer public access, have continuity in its uses and development, attract new business, and address the growing problem of poor water quality and contamination.

In 1991, the City of Tacoma purchased 27 acres of Thea Foss Waterway land to accomplish a waterfront “renaissance” vision that included hotels, retail space, public access, parks, restaurants…a thriving waterway that residents and visitors could enjoy, and that would offer the City a long-term return on its investment. The vision included a continuous walkway, or esplanade, allowing visitors to enjoy a 1.5 mile stretch to stay, recreate, eat, and shop. The “Design and Development Plan for the Thea Foss Waterway” was completed in 1998.

In 1996, the City commissioned (chartered) the Foss Waterway Development Authority (FWDA) to implement the Foss development plan. The City’s intent was to create an organization focused on redevelopment, that negotiates sound business deals, and that is relatively removed from politics generally associated with private investment on public land. Acting on the City’s behalf, the FWDA markets, sells, leases, and manages publicly-owned Foss Waterway property. Deals negotiated by the FWDA must be approved by the City Council. The FWDA also provides event sponsorships and writes grants to realize components of the waterway vision. Since the purchase of the 27 acres and completion of the Foss Development Plan and initial cleanup, the FWDA has diligently sought developers and investors to “complete” the vision of the waterway.

The Thea Foss Waterway is a federally designated Renewal Community and, as such, the City was allocated $12 million in annual taxdeductions. In turn, to encourage investment in the area, the City created financial incentives for developers. For example, the City offers a 10-year property tax exemption for new residential construction of four units or more. Furthermore, to attract private investment, the City subdivided the 27-acre site and the individual properties were brokered by the FWDA. The City must approve all development proposals and this process includes public participation opportunities through the Shoreline Master Program and FWDA meetings. If a developer meets all FWDA, City, state agency, lender, and public requirements, the project moves forward. As part of regulatory requirements, shoreline access (which is held in public ownership) and easements across development sites must provide links between streets and the public esplanade.

The 1983 Superfund designation offered a unique opportunity for the City, the EPA, developers, private industry, and state regulatory authorities to work together to achieve a common vision. To expedite the clean-up process, the City approached the EPA in 1994 and voluntarily entered into an Administrative Order on Consent to begin remedial design on the waterway. The City also facilitated the formation of a Funding and Participation Group by which responsible parties could participate in the study and design process for a small fee. Then, in 1997, the City and other parties agreed to a multi-year, non-binding allocation liability for cleaning up this site. This reduced the litigation costs and eliminated potential delays in clean-up. These actions resulted in a comprehensive settlement proposal from the responsible parties to the EPA, ultimately resulting in more timely cleanup of the waterway.

*Absorption rate: The rate at which rentable space is filled. Gross absorption is a measure of the total square feet leased over a specified period, with no consideration given to space vacated in the same geographic area during the same time period. Net absorption is equal to the amount occupied at the end of a period minus the amount occupied at the beginning of a period, and takes into consideration space vacated during the period.

Citizens for a Healthy Bay

Additional Information
“‘Visions’ are always being renegotiated as actors and relationships and economies change. It isn’t static. And often what energizes one group to participate at one point in time is different than at some other point. I keep coming back to this idea that one person’s ‘vision’ is often perceived by someone else as a ‘tyranny.’ The persistence of a vision is contingent on the persistence of participation, mobilization, and resources of a set of actors in relation to others. It is a tricky power dynamic.”
– Steve Atkinson, Associate Planner, Community & Economic Development

Tacoma’s master planning process mobilized various interests over the course of its development. The key to success in this case was the consistency of the vision throughout the process.

“Environmental leadership makes good economic sense.”
– Mary Henley, Project Manager, City of Tacoma
This principal embodies the City’s decision to embrace the Superfund designation, and leverage it as the platform for a waterfront renaissance.

Information on the Thea Foss from the City of Tacoma website
www.cityoftacoma.org/Page.aspx?hid=2241

Shoreline Master Program: An Element of the Comprehensive Plan and Title 13 of the Tacoma Municipal Code
cms.cityoftacoma.org/Planning/Shoreline/CityCouncil/Amended/Ord28034Exhibit_A.pdf 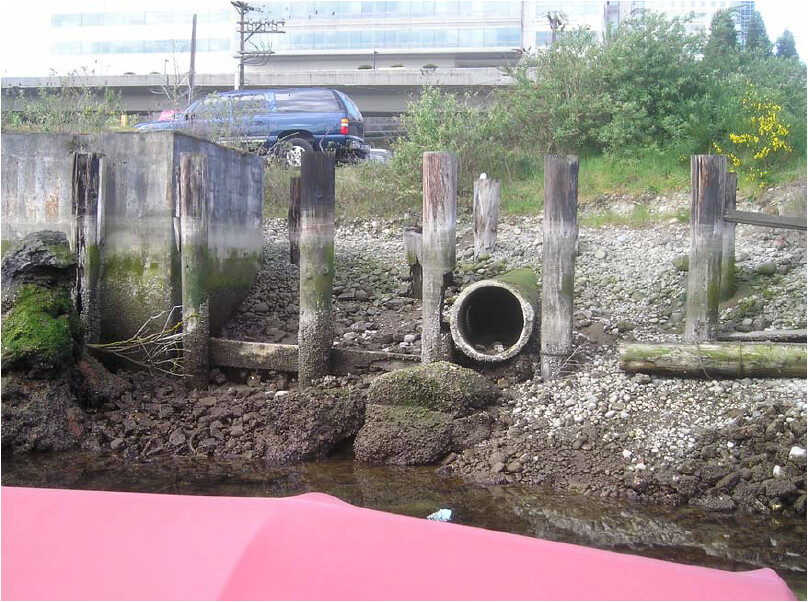