Summary
Gig Harbor is a small city nestled just north of Tacoma on the shore of Puget Sound in Pierce County, WA. The historic waterfront village has a deep history of maritime activity. Despite its beginnings, the economy of Gig Harbor today looks very different, as resource economies have given way to recreation, tourism, and a large retirement community. However, boat building and commercial fishing is still of great significance to the area and are foundational to the history and culture of Gig Harbor.

Over the past decade, members of longtime fishing families and leaders in City government have led a “grassroots” effort to help preserve the historic working waterfronts of Gig Harbor and protect its maritime industries. This effort has overwhelmingly been supported by the community through bonds and fundraising, and has led to successful outcomes like construction of the multi-use Maritime Pier and renovation of the Gig Harbor Boatshop. The City is also protecting these working waterfronts by updating their Shoreline Management Program, in cooperation with the Washington Department of Ecology, and by designating these waterfront parcels as “historic waterfront districts.”

The City and community are still working toward achieving healthy growth of new uses and economies while retaining the history and culture that makes Gig Harbor a special place, providing for “the right kind of change” to the city.

Transferability
Small coastal communities throughout the nation face pressures similar to those experienced in Gig Harbor: how to preserve their historic waterfront uses while balancing new uses, changing economies, and growing populations. Communities can follow Gig Harbor’s example, where community leaders led a successful grassroots effort that mobilized the community, elevated the importance of protecting cultural and historic waterfronts, and resulted in popular support for financing mechanisms that enabled the purchase and protection of waterfront property. Gig Harbor also capitalized on existing State policies and regulations, such as the Shoreline Management Program, to protect the largest remaining concentration of its historic waterfront.

History
Gig Harbor is a small city nestled on the shore of Puget Sound in Pierce County WA, just north of Tacoma. This historic waterfront village has had a long history of maritime activity since its settlement by Croatian fishermen in the mid-1800s. In addition to commercial fishing, Gig Harbor was founded on the resource-based industries of boat building and logging. Today, the economy of Gig Harbor is very different from that of its early history, and is dominated by recreation, tourism, and a large retirement community. Nonetheless, boat building and commercial fishing are still of great significance and are foundational to the history and culture of Gig Harbor.

Gig Harbor’s working waterfronts are home to a significant concentration of historic maritime uses and structures, including contiguous netsheds and commercial fishing vessel moorage facilities on either side of the Eddon Boat Building facility and Eddon Boat Park. These structures and their associated uses have aesthetic, architectural, historical, and cultural significance that characterize the community’s regional maritime identity and history.

Challenges
Community growth and changes in the fishing and boat building industries have resulted in increased pressures on Gig Harbor’s waterfront. Moreover, shifting economies have made it more challenging to balance historic working waterfronts with private and recreational uses. In response to these challenges, members of longtime fishing and boatbuilding families, along with City leaders, have led a decade-long “grassroots” effort to help preserve the historic working waterfronts of Gig Harbor and protect its maritime industries. The community has overwhelmingly supported this effort.

Actions
Efforts began in earnest in 2004, when Gig Harbor’s citizens approved a $3.5 million bond to purchase the historic Eddon Boatyard property. Built in 1945, the boatyard includes a boatshop, two marine railways, a dock, and the brick Hoppen House. The facility is a classic example of a 20th century family-operated boatyard typical of the Puget Sound area. The State’s Heritage Capital Project provided funding to restore the boatshop and the City leased the entire property to the Gig Harbor Boatshop, a non-profit company that works to preserve, interpret, and perpetuate Gig Harbor’s historic working waterfront by offering boat building programs and classes, and providing field trips and boatshop tours. Today, the boatshop not only provides a service to the community, but it will be a fully functioning boat building and maintenance non-profit business that accommodates vessels up to 63 feet in length: one of the only facilities on the Washington coast with this capability.

The success of these initial efforts, and continuing support from the community, led the City to aggressively acquire additional historic waterfront property, thus ensuring that its citizens will decide on future uses of infrastructure and shoreline. The completion of the Maritime Pier to replace the original, demolished pier is one example of successful redevelopment of a historic waterfront parcel purchased by the City. In 2010, the City received $390,000 from the Washington Department of Commerce and $50,000 from the Gig Harbor Commercial Fishermen’s Club to construct the new pier. Completed in September 2012, the Maritime Pier serves to bolster downtown commerce, promote heritage tourism, and provide an access point for recreational and commercial vessels alike.

Gig Harbor continues to find ways to focus its efforts. For example, the City capitalized on the Shoreline Management Act of 1971 to implement policies that provide for sustained protection of its historic working waterfronts. The Act directs local governments to develop and administer local shoreline master programs to regulate shoreline uses. The City is working with the Washington Department of Ecology, which administers the Act, to update its Shoreline Management Plan (SMP) to not only meet the Act’s requirements, but also to provide for its own unique needs. The City is drafting seven designations for the “Shoreline Environment Designation” section of the SMP, including a “Historic Working Waterfront” designation.

The purpose of the Historic Working Waterfront designation is to recognize and preserve two of Gig Harbor’s most notable historic industries: commercial fishing and boatbuilding. The designation allows for a limited range of non-water oriented uses as a means to promote preservation and rehabilitation of historic structures. Current zoning permits professional services: the preferred and best uses being commercial fishing services/moorage and boatbuilding. Properties listed on the City’s Register of Historic Places are eligible for conditional non-water oriented uses such as offices and sales, and water-enjoyment uses such as restaurants and small-scale marina trades businesses.

The updated Shoreline Management Plan and the Historic Working Waterfront designation will recognize historic resources such as the overwater netsheds, promote public access and knowledge of Gig Harbor’s history, and support heritage tourism, while protecting existing ecological functions, restoring ecological functions that have been degraded, and enhancing public access to the shoreline.

Next Steps
Gig Harbor’s waterfront districts still contain historic properties that remain at risk. Unique to Gig Harbor are the 17 netsheds constructed in the early 1900s to store and mend fishing nets and repair equipment used on commercial fishing vessels. Each netshed has a unique backstory; they are largely owned by Croatian families who are descendants of the City’s first residents. With the exception of the commercial vessels themselves, netsheds are one of the more prominent surviving architectural and visual connections between the community and one of the oldest and most successful fishing fleets on the Pacific coast.

The “Historic Working Waterfront” designation provides for “adaptive reuse,” meaning that sheds can be “converted” into uses such as restaurants, offices, and other commercial interests. Some argue this promotes conversion from their intended and rightful use for fishing, while other say it is one, if not the only way, to preserve the sheds and ensure their maintenance and upkeep.

Guy Hoppen, commercial fisherman, boatbuilder and President and Founding Director of the Gig Harbor BoatShop, offered his perspective on the adaptive reuse of netsheds:

“Adaptive reuse of the netsheds, in my opinion, will hasten the gentrification of the working waterfront. If the goal is architectural preservation only, then adaptive reuse works. But if the goal is to perpetuate working waterfront use and especially commercial fishing use on Gig Harbor’s waterfront, then allowing office space, storage, etc., will simply add to the value of fishing family properties, making them disappear even faster. Let’s face it, over water structures as charming as the netsheds would be desirable playpens for upscale development proponents. There will have to be specific ties to commercial fishing retention for me to support adaptive reuse (e.g., in exchange for providing a fixed percentage of moorage for fishing vessels going forward, a property owner might be allowed to adapt a netshed to a non-water dependent adaptive use that provides that property owner with economic relief).”

“Forty years ago, authors of the City’s current SMP aptly wrote that preserving Gig Harbor’s “character” meant “to preserve Gig Harbor’s fishing fleet as a significant cultural and economic activity, to maintain supporting services, and to encourage development of moorage and dock facilities. This is still our goal. But as the cost of waterfront properties escalates, preservation of some of our remaining netsheds may become impractical. And although no one expects all 17 netsheds to survive, “adaptive reuse” means more may. Rather than regulating “what we can’t do,” the most productive approach is to ask “what do we want.” Historic preservation is contagious and is best driven by incentives.”

Fortunately, there are provisions to guide proper use of historic buildings like the netsheds, including deed restrictions, requirements for interpretive information, and a requirement that sheds be registered in the City’s register of historical places. Furthermore, all commercial uses must provide public access.

Issues surrounding waterfront uses remain at the forefront of the City’s agenda. Most waterfront properties are in private ownership and as land increases in value, so does the risk of these properties changing hands and being converted to “inappropriate” uses that disproportionately displace historic ones. The “Historic Working Waterfront” designation allows for uses such as boatbuilding, fishing facilities, and other maritime activities, and provides enough regulatory support for the City to focus on future acquisitions.

If Gig Harbor hopes to preserve its maritime authenticity, it must preserve historic buildings AND uses. This approach is foundational if the culture, character, and economic well-being of Gig Harbor’s waterfront are to be preserved. Gig Harbor’s North Pacific fishing fleet and local boatyard facilities represent a vibrant and culturally significant economic driver for diversity and growth. The challenge will be to foster “the right kind of change” for Gig Harbor. 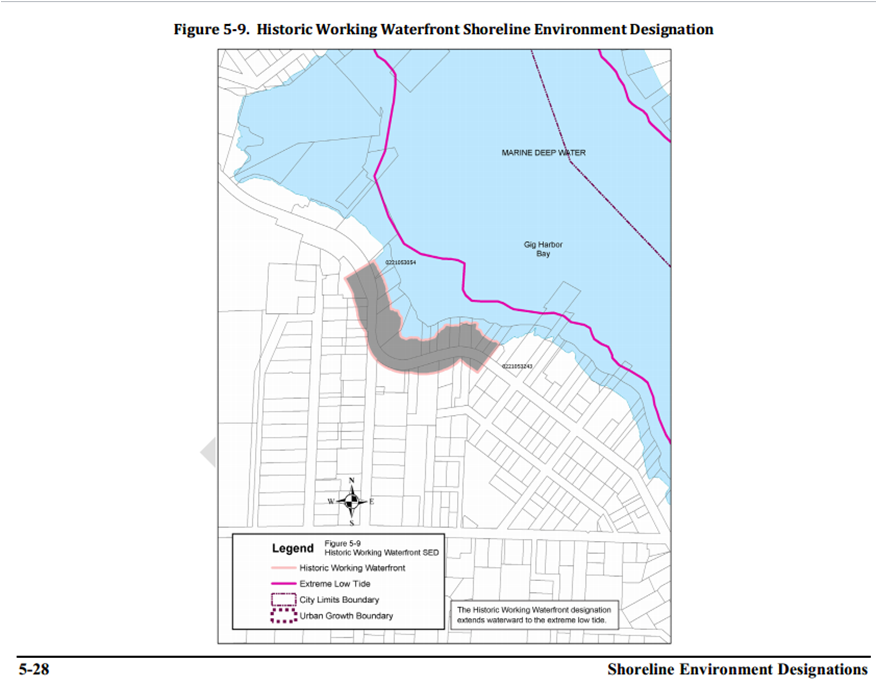