Summary
Port Salerno is a quaint historic fishing village of approximately 10,000 people, hidden away on the east coast of Florida near the mouth of the St. Lucie River and the Atlantic Ocean. The Port Salerno area is ideal for uses that include sport and recreational fishing, offshore charters, marinas, and commercial fishing.

Port Salerno was finding it difficult to retain its “fisherman’s paradise” identity. The community was in need of revitalization and the commercial fishermen were at risk of losing their docks. Collaborations with the county and the State of Florida enabled the community to find viable solutions to address local goals, including public access to its waterfront, retention of commercial fishing as a historic resource, and revitalization of the local economy.

Transferability
The process followed in Port Salerno has all the hallmarks of many similar successful efforts and thus, is transferable elsewhere, albeit with the need for much local effort. The main components of success were the will of the community and its desire to come to equitable solutions, sprinkled with a healthy dose of strong leadership. Though some of the mechanisms and policy tools used in Port Salerno may be unique to Florida, such as Community Redevelopment Areas and a Waterfronts Florida designation, the overall goals and outcomes likely could have been achieved via other mechanisms.

Full Case Study Description
History
For many years, the Port Salerno community has worked diligently on revitalizing its waterfront. In 2001, Port Salerno was one of the first Community Redevelopment Areas in Martin County. In that same year, Port Salerno also was designated a Working Waterfronts Community by the Florida Department of Community Affairs (currently, designations are made by the Florida Department of Economic Opportunity). With extensive public participation and the assistance of the Port Salerno Community Revitalization Committee, the community generated a vision plan to address four goals: 1) public access to the waterfront; 2) retaining commercial fishing as a historic resource; 3) revitalizing the local economy; and 4) mitigating the effects of natural hazards. The local government adopted the vision plan and has implemented many of the policies within the plan.

Actions and Approaches
The main method utilized by the Port Salerno community and the commercial fishermen was simply getting organized. For example, in addition to the fishermen organizing, a Port Salerno Neighborhood Advisory Committee was formed by the Martin County Community Development Agency to advise them on redevelopment issues. By utilizing all these methods, the community was able to achieve its goals.

The first issue the community had to resolve was a challenge to the commercial fishermen’s claim of ownership regarding the dock area. Martin County had discovered that the 15 commercial fishing docks were located on county <ahref=”javascript:poptastic(‘http: www2.vims.edu=”” bridge=”” wateraccess=”” glossterm.cfm?term=”right-of-way’)””>right-of-way. Because the fishermen had used the docks for over 50 years, they believed they had a right to continue to use them. The Port Salerno Neighborhood Advisory Committee was in support of the commercial fishermen and wanted the county to resolve the dispute in a manner beneficial both to the county and to the commercial fishing industry.</ahref=”javascript:poptastic(‘http:>

During dock ownership negotiations with the county, multiple interests surfaced amongst the commercial fishermen, creating disharmony. Also, as noted earlier, the fishermen were struggling with a negative image held by some in the community. In response, the fishermen organized themselves into a non-profit: The Port Salerno Commercial Fishing Dock Authority, Inc.

With local support and legal negotiations, Martin County came to an amicable agreement to lease the dock property to the fishermen. The county obtained a submerged land lease from the state that formally declared county ownership of the area. Then, in turn, the county created a 10-year lease agreement with the newly formed Port Salerno Commercial Fishing Dock Authority, including the option to renew for three additional 10-year increments. The lease cost $8,055 per year: equal to the annual submerged land lease fee paid to the state by the county. The lease agreement required the commercial fishermen keep their docks clean and well maintained, and it stipulated the number of boat slips allowed. The solution proved positive for the fishermen because it resolved the public’s concerns.

Greater public access to the waterfront was the second issue to resolve. The Port Salerno Community Redevelopment Plan included construction of a public boardwalk. The vision plan called for a “Pocket Walk” wrapping around the entire Manatee Pocket on the waterfront that would be accessible to the public: pedestrians and boaters alike. The boardwalk also was an integral part of the Waterfronts Florida designation and the Port Salerno Community Redevelopment Agency utilized that state grant to construct the first phase of the boardwalk. Although the Pocket Walk was initially supported by commercial fishermen, some had doubts when the final construction drawings were made public. After a series of meetings with the Commercial Fishing Dock Authority, the county mitigated the loss of some dock and slip space by extending an existing commercial dock.

The first phase of the boardwalk was completed in 2003 and included several temporary mooring slips, along with environmental signage describing the Manatee Pocket habitat. The second phase was completed in 2006 and created an eight-foot wide boardwalk between all the commercial fishing docks, as well as a loading station for the commercial fishermen. The Community Redevelopment Agency also installed benches and solar lighting on the boardwalk to increase its use. In 2006, the Community Redevelopment Agency designed the final phase of the Manatee Pocket boardwalk, which included the last county owned properties and other aesthetic improvements to the boardwalk area.

The third issue was to revitalize the local economy. The main street in Port Salerno was redesigned to a more pedestrian friendly roadway, including a new fire station and a new civic center. The community realized that this public infrastructure would help improve the local economy. A new restaurant and a bed and breakfast were both constructed with the assistance of a Community Development Economic Block Grant. Today, the Port Salerno community has accomplished many of its community redevelopment area projects and the economy is rebounding.

The final issue was to mitigate the effects of natural hazards. While fish and crabs are landed in Manatee Pocket, the catch is then hauled to off-water facilities for processing. The waterfront investment is limited to wooden docks and four tarp covered tube metal kiosks. The low-maintenance, low-cost kiosks and the off-water processing help to reduce the need for expensive public and private waterfront infrastructure in a high hazard area.

Benefits
By creating the Port Salerno Commercial Fishing Dock Authority, the commercial fishermen were able to lease the dock property from the county, become a more unified group speaking with one voice, actively work on a positive public relations campaign and establish an agreement with several wholesale seafood distributors.

The Port Salerno Commercial Fishing Dock Authority has become active in their community, therefore changing the negative perception of many within the community. For example, in 2006 the Dock Authority initiated, and continues to organize, the Port Salerno Annual Seafood Festival, which has become an important cultural and economic event for the community. In 2011, over 35,000 people attended and proceeds were distributed to numerous community organizations.

Port Salerno’s commercial fishermen have been financially successful with their new organization and the Dock Authority has received state and national recognition for its organization and innovative method of protecting the commercial fishing industry. Currently, the Dock Authority annually harvests more than one million pounds of fish, with a wholesale value of over $1.5 million.

The Manatee Pocket Walk provides the community with access to the waterfront day and night. The Manatee Pocket area has benefited from the completion of a new Port Salerno Civic Center, the Port Salerno Fire Station, the redesign of the main thoroughfare (A1A), and other infrastructure projects. The community has been supportive of the community redevelopment area and many members have been active participants in the process. Furthermore, Port Salerno’s economy has been growing, with the opening of new restaurants, a bed and breakfast and the revitalization of several commercial buildings along the main street.

Next Steps
Martin County received a Stan Mayfield Working Waterfronts Grant in 2011 to purchase nearly two acres of land adjacent to the current Port Salerno working waterfront. The county intends to enhance the property and lease it to the Port Salerno Commercial Fishing Dock Authority as the newly christened Historic Salerno Fishing Village. A management plan is being crafted that will include a Declaration of Restrictive Covenants that aligns with the purpose of the Stan Mayfield Working Waterfront Grant Program.

Enhancements will include construction of a working fish house complete with ice depot, vendor bays, and other necessary amenities to support the fishermen; construction of additional commercial fishing dock slips; and a work area to repair fishing equipment. The Village also includes a structure that will be renovated to serve as a location for Dock Authority meetings and as a home for a dock master. Though optional at this point, the county intends to construct a Wholesale Fish Market to support commercial fishing and provide fresh seafood to the community. Lastly, there will be historical and educational displays about Port Salerno and its working waterfront. 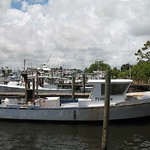