Summary
A House Joint Resolution during the 2008 Legislative Session created the Alabama Waterfront Access Study Committee to identify the loss and potential loss of diversity along the shorelines of Alabama, and to document how these losses impact access to the state’s public trust waters, including:

In March 2010, the Committee submitted a final report to the Legislature proposing recommendations in several categories, which partners are working to implement. In a recent development (early 2012), the City of Gulf Shores implemented a new overlay district which allows for the re-establishment of water-dependent businesses and provides model language regarding traditional, commercial, and recreational working waterfronts. The Alabama Working Waterfront Coalition has been working informally to advance working waterfront efforts throughout the state. Partners are considering formalizing this entity to directly address and implement recommendations made by the Study Committee.

Transferability
The approach of a legislative task force dedicated to research and recommendations on waterfront challenges and opportunities is replicable in other regions. The primary challenge faced by the WASC (legislative committee) was an unfunded mandate, but the partners’ dedication to the issue helped overcome this challenge. Having an organizational champion, such as the Mississippi Alabama Sea Grant Consortium, can help overcome the common problem of unfunded mandates.

Like most states, working waterfront language and protection provisions have not been incorporated into the State coastal management plan. This can be overcome, as in Alabama, through a viable and representative working waterfront coalition which is contingent on educating the appropriate working waterfront business owners/operators and related stakeholders about what defines a working waterfront and how they are affected. It is important to think broadly as to who might constitute a stakeholder. For example, although not expected in the beginning, charter fishing, chambers of commerce, and large-scale marine industrial businesses have all become key stakeholders.

Background
Water is abundant in Alabama. The identity, culture, and economy of the state are tied to this precious resource that supports tourism, transportation, municipal and industrial water supply, fisheries production, and recreation. Access to Alabama’s waters has to be balanced with other desires for waterfront development. Competition for land use in the coastal zone has increased as the population has grown and tourism development has raised property values, resulting in a decrease in locally-owned working waterfront businesses. Waterfront lands are being converted to condominiums, casinos, and resorts. The issue is further exacerbated by natural and human-caused disasters that have led to coastal investment in various alternative uses, thereby accelerating the rate of conversion.

In 2006, two workshops were held to launch discussions in both Alabama and Mississippi about these working waterfront challenges. Shortly thereafter in 2008, Mississippi/Alabama Sea Grant Consortium funded the development of a database tool to assist with working waterfronts planning. The goal was to understand the dynamics of Alabama’s working waterfronts in addition to building a database of water-dependent businesses in the southwestern part of state. The database could be used to start quantifying current economic conditions and predict land use change in the Gulf region. It has served as a baseline for monitoring ongoing changes through time, which will aid in planning and decision-making processes.

These and other actions have contributed to the Alabama Legislature’s recognition of the importance of working waterfronts and their interest in looking at opportunities to preserve and enhance this valuable Alabama asset, especially in light of current rates of loss.

The Study Committee
House Joint Resolution 656, passed during the 2008 Legislative Session, created the Alabama Waterfront Access Study Committee. The charge was to provide to the Alabama Legislature a report outlining the loss and potential loss of the diversity of uses along the shorelines of Alabama, and to document how these losses impact access to the public trust waters of the state. The Committee was assigned the following duties:

In March 2010, the Committee submitted a final report to the Legislature proposing a series of recommendations in several categories and outlined in three priority tiers:

Every one of these recommendations will have considerable policy implications, including for example, potential changes in local land use ordinances and zoning.

Next Steps
Though the report is complete, work is only just beginning. Mississippi/Alabama Sea Grant Consortium funded a research project to extend the Mobile area inventory database project described above to include both Alabama waterfront counties and all three Mississippi counties.

In a very recent development (2012), in part as a result of the recommendations above, the City of Gulf Shores recently implemented the Historic Downtown Overlay District, which includes a series of zoning regulations that set the framework for a downtown neighborhood district. This allows for the re-establishment of water-dependent businesses — boatyards, marinas, seafood processors — that historically were part of the waterfront. Those uses are not allowed now, and the overlay encourages them. In addition, the overlay district provides model language for preserving, protecting, and enhancing the traditional, commercial, and recreational working waterfront culture and character of the area.

Finally, the Alabama Working Waterfront Coalition has been informally working together to advance working waterfront efforts throughout the state. Partners are considering formalizing this entity to directly address and implement the recommendations made by the Study Committee.

Additional Information
“…tragic to see where you only have one major access to use and everybody trying to use it…funnel commercial fishermen of over 200 boats…not counting recreational boats.” Avery Bates, Commercial Fisherman and Vice-President of the Organized Seafood Association of Alabama.

“…here you got about 200 fishermen, then you got probably another 400, 500 shuckers and the processors…you lookin’ at about 1,000 people this operation is employing right now…that’s a lot of food on peoples’ tables.” Gordy Wright, Commercial Fisherman and President of the United Seafood Association. 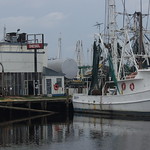